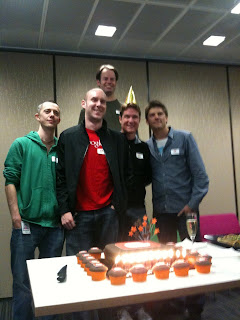 Here we are at Google Sydney tonight! The Australian Blogger team talked a little about Blogger's past, and we had sparkling wine and sushi.
Posted by Andrew CAlvin at 19:15 No comments:

Email ThisBlogThis!Share to TwitterShare to FacebookShare to Pinterest
Labels: Google

I’ve said it many times: using your ISP email address (bbloggs@bigpond.net.au) is not a great idea, as your email address will change every time you change ISP. The free alternative is an account such as Gmail, ZoHo or Hotmail, and I always recommend Gmail. Why? I logged into Hotmail today to check out the ‘new’ interface that has just been rolled out. A quarter of the screen was an advertisement for solving a ‘man’s problem’ together with a picture. Why would I recommend such a product to my mother, client  or daughter?

Gmail has much better spam filtering, and the advertisements are far, far less obtrusive. Even better, you can set up a Standard Google Apps Account and get your own domain name, 50 email accounts and all for $10 per year! In 10 minutes you could be theboss@mylawfirm.com.

My annual review of linux (mostly ubuntu) has come up, and this time it’s Jolicloud 1.0 (http://www.jolicould.com). It’s an Ubuntu derivative which I’ve been following since early alpha releases. It’s aimed at non-tech users with a low power computer. I put it on my Dell Mini 1020 (with an Atom processor and 2 GB of RAM). It’s probably 10% faster than Windows Ultimate (which it dual boots into). I haven’t found a compelling reason to use it yet, but it works fine and is free. It took me over an hour to work out how to install the excellent media player XBMC (www.xbmc.org), which on my charge out rate means it cost more than the PC. On the other hand, it took about 2 minutes to install the supported version of Hulu (based on XBMC). Could I live with it? Almost - it does everything I need a netbook to do (including Skype), is a little snappier than Windows, but does lack a few things. I use Evernote (http://www.evernote.com) extensively, and on Windows it caches all my data locally so I can use it while offline - it doesn’t do that on linux.

You may have heard that Liverpool City Council chambers burned down on 14 August 2010. It is reported that it lost its strategic plans, engineering documents and development applications. The Deputy-Mayor was quoted as saying that not everything was backed up, and as of 17 August the web site was still down. Of course a lot of paper was lost as well, perhaps including your client’s submissions to council. In hindsight, as the solicitor for a local resident, how would you protect your client’s position? Whenever I send out originals that are important to me I always scan the final set to PDF. It’s usually quick and easy on our A3 double-sided scanners with document feeders. It’s harder with large plans, but I will often already have an electronic copy of those.

Do you still keep a mail book? When I was a boy this was an exercise book, and all couriers and post were entered into it every day. This has saved the day several times over my career, and is a good office protocol. Now you can prove when those documents were posted to LCC. In a similar vein, you might keep an execution register. This normally records usage of company seals, but you might also use one where you hold a power of attorney.

Finally, this points out why you shouldn’t maintain your servers on your premises. Off-site hosting can take many forms, can be cheaper than doing it yourself, is more secure, and is far less likely to suffer a fire or water incident than your office. Give it some thought.

Posted by Andrew CAlvin at 17:22 No comments:

Email ThisBlogThis!Share to TwitterShare to FacebookShare to Pinterest
Labels: cyberspace

This article's a bit late, but the European Court of Justice dealt with several claims against Google in March 2010. It remitted three claims back to the French Supreme Court to be dealt with in accordance with its ruling that it was permissable, for example, Honda to buy adwords such as BMW so that mentions of BMW could show Honda advertisements.

For further reading you might like to read the Cour de cassation in judgement # 861 (08-13.944) handed down on 13 July 2010, where it held that GIFAM's claim against Google failed. As a result, Google has subsequently announced that it will change its adwords policy to be more closely aligned with that in the USA.
Posted by Andrew CAlvin at 13:49 No comments: