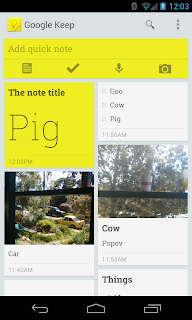 And finally, I'm not going to put all my data in one basket. I'm a happy Google Apps for Business user, but my reliance on a single vendor is going to stop there. Of course Google isn't going to go broke or go away suddenly, but us lawyers are usually a cautious lot.
Posted by Andrew CAlvin at 12:24